Using the Ultra-Wide High-DPI Prestige PS341WU with a Mac

For over a year now, I’ve been using an MSI Prestige PS341WU as my main display. It plugs into my MacBook (now, an M2 MacBook Air of my own, previously mostly a 16" M1 MacBook Pro from work).

At the time I bought it, it was about the only reasonably priced ultrawide that also stood a chance of being considered ‘retina’ - and a casual browse around now seems to indicate that is still the case.

I have it set, in its ‘Professional Mode’ setting, to ‘Display P3’, and the color profile in the ‘Displays’ settings for it also set to ‘Display P3’, and I believe this gives me accurate color reproduction (it looks the same as the built in MacBook display, for what that’s worth). It supposedly supports HDR, but I don’t use that.

I was only able to get the high-DPI resolutions to work with a Thunderbolt connection - USB-C to HDMI or DisplayPort cables - even the supposedly 4K capable ones - didn’t work, so I guess watch out for that.

My biggest complaint was that it had the extremely frustrating habit of usually not waking when I wake my computer, leading me to have to unplug-replpug or power off-on on almost every wake (ugh!).

It turns out that this problem is fixed in a firmware update - ‘v030’. Of course, there is no indication of what the update actually contains to be found anywhere on the web, and MSI hardly advertises it at all.

The actual update procedure is rather onerous. You need to use Windows to do it. I used an Intel Mac Mini running Windows 10 in Boot Camp.

The MSI web site is not at-all clear on how the firmware update procedure works. One thing I found non-obvious is that you need to have the USB-A and Thunderbolt (maybe USB-C is enough?) connection plugged in for it to work.

You need files from both the ‘Driver’ and ‘Firmware’ tabs from the support page on MSI’s website - at least ‘MultiSP’ and the firmware itself - and possibly also ‘USB Hub Genesys Driver’. MSI claims you also need ‘vcredist_x86.exe’, which is not actually on any of their pages. It seems to be a reference to the Visual C++ Redistributable packages Microsoft distributes. I guess that’s harmless to install even if it’s not required.

Once you have all these, you can follow the only-slightly-confusing instructions in the Word document found in the ‘Prestige PS341WU Firmware SOP’ download - also on MSI’s firmware page linked above.

I also updated the ‘USB type-C firmware’ - again, no indication I could find of what that actually does. For it you also need the ‘VL10xEndUserTool’. I don’t think that’s the magic that makes reconnection work, because I think my monitor actually already had the same version on it.

I’ve been running these updated firmwares for about three months now, and the monitor now reacts well (if a little slowly than would be ideal) to the laptop waking. In fact, I can’t think of any problems I’ve had with it since then.

[It is amazing to me how rough-and-ready this firmware update process is. These are plainly internal engineering tools that have just been released to the public.]

Power: Reviews online are ambiguous about this, but it will provide USB-C power over the Thunderbolt display cable connection - but it only provides 15 watts (only 3W more than an old-school USB-A iPad power adapter!) Believe it or not, this is enough to (slowly) charge both the Macs I’ve used with it when plugged in - even on days filled with WebEx calls. Occasionally when doing things that require constant high power usage - basically if I’m non-stop compiling code - the battery will tick slowly downwards instead of up, but never enough that I’ve had to stop working. It’s never annoyed me in practice at all - (the MagSafe connector for the M2 MacBook Air I got in August is still in its packaging!) 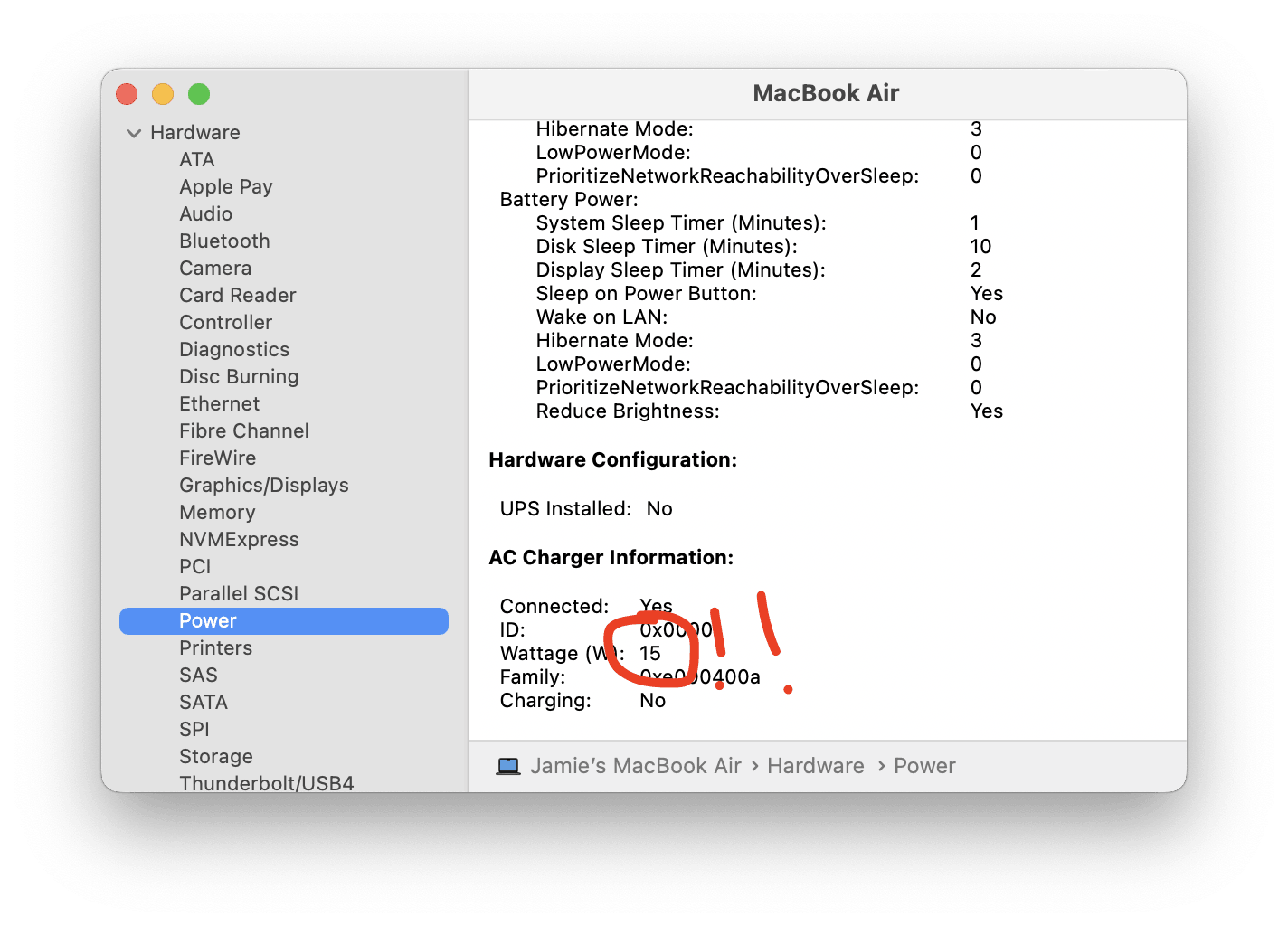 USB: It contains a USB 3.2 Gen 1 hub, with one port on the back that’s ideal for a webcam, and two ports and a SD card reader on the side - but that requires a second USB cable to be connected to work - it doesn’t work over the display and power(ish) cable.

USB #2: For a long time I thought that one of the USB ports was broken. What had actually happened is that I’d switched on ‘Quick Charger’ in the monitor’s settings. I was hoping it would up the 15W to the laptop. What this (undocumented!) feature actually does is turn one of the ports on the side of the monitor into a charge-only port.

Height: The built-in stand doesn’t raise the display high enough, especially for standing deck use (though this is true of most monitors). I 3D printed myself some risers.

Uh, this seems to have unintentionally turned into a review. In that spirit:

Given the idiosyncrasies, 8/10 on implementation - but for day to day use, if you can get the firmware up to date, really more like 10/10 for overall satisfaction. If you’re at all tempted by an ultrawide monitor, in actual use this one is great.